In my last post I talked about my role as a Make Up Artist on the short film Crossed Paths. I talked about how I created make up effects for each of the two leads and gave a brief synopsis of the film, which was made by young people in Crawley.

I also worked as the Art Director for the film, making key props and dressing the locations. A lot of the action in the film takes place in a small square with shops and a pub where the characters hang out.

One scene required filming in a shop where Aaron gets a job. We were lucky to find a shop in the square where we were shooting that allowed us to film on their premises over night. The shop was closing down and the owners agreed to leave behind their remaining stock for us.

There wasn’t enough stock to fill the shop, which was a bit of a challenge, but I managed to fill the front of the shop, the till area and a central aisle. It was a good couple of hours of shuffling stock around while the crew filmed scenes outside. As often happens with set and props work, the crew only ended up using a portion of the set but I was very happy with how it all looked under the lights. Aaron’s neighbour Hasan has given him a job in his shop, but they soon come to blows over Aaron’s growing right wing views. When Aaron’s new friend and N.E.M. member Joe asks Aaron to post flyers about their march in Hasan’s shop, Hasan objects and Aaron quits.

We used a local pub as the meeting place for the N.E.M. which was conveniently located in the same square as the majority of our shooting, in Gossops Green. The close proximity of our locations lent itself to the sense of confinement and the intensity of these different cultural groups struggling to live side by side.

The staff of the Windmill Pub were extremely accommodating and nothing like the scary looking thugs we filled their pub with. The pub was already decked out in England flags, which made for a perfect backdrop for the N.E.M. meetings. My work at this location consisted of lighting the scenes and rearranging the pub’s interior to accommodate our equipment and make the most of the location. I repositioned a lot of the furniture and decorations to suit the blocking of each scene, added some more patriotic embellishments and filled the pub with N.E.M. flyers, advertising the march. 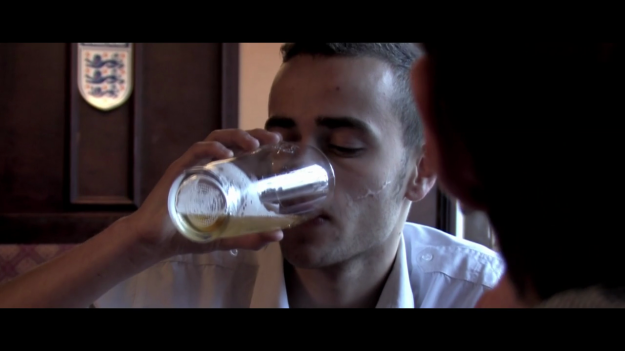 We first see the pub when Aaron meets Joe and they go for a pint. Joe is in a similar position to Aaron, out of work and angry at the lack of opportunities. He tells Aaron about the N.E.M. who blame immigration and multiculturalism for the lack of jobs. Joe takes Aaron under his wing and encourages him to come to the next meeting.

In the next scene at the pub we see Aaron becoming indoctrinated into the group as the N.E.M.’s leader rallies them for the march. It was a tough scene to shoot as the interior of the pub was quite dark and the number of wide shots necessary to show the whole group meant that we were limited as to where we could place our lights.

As the N.E.M. are preparing to march, a group of college students plan a counter-demonstration to oppose the right wing group. We filmed the scene in the canteen of Central Sussex College in Crawley. 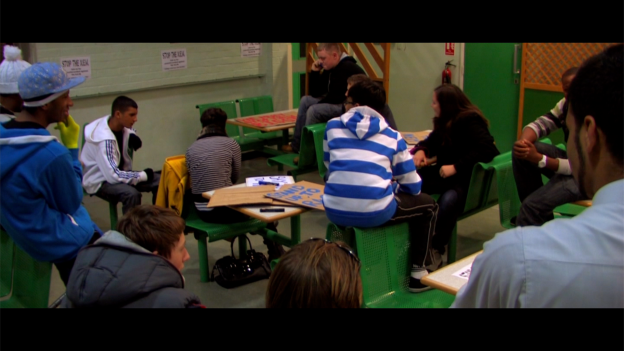 I decorated the canteen using Stop the N.E.M. flyers, which the protest organiser also hands out during the scene. I created a range of placards for the protest scene, some of which I left unfinished and placed around the canteen along with marker pens, paint and brushes so that our extras could be seen working on them. I also created a large banner to be used later at the protest, which I hung as a backdrop.

The action of the film all builds up to the day of the protest when all of these groups face off against each other. As this was a Council funded projected we were able to close the roads where we were filming, which was great. It also meant that we had police officers with vehicles on hand who were happy to participate, which really added to the look and feel of the scene. I made a range of banners and placards for the protest scene, some of which were also used in the earlier canteen scene. I wanted the various signs to look homemade and so I used fairly cheap materials. I also tried to create a difference in style between those belonging to the N.E.M. and those belonging to the students.

It was a strange experience creating protest signs for both sides of the protest, a bit like having split personalities – switching from extreme right-wing hate-speak one minute to anti-fascist imagery the next. I was also a bit worried about what my neighbours would think when I had to leave a lot of the placards outside to dry. 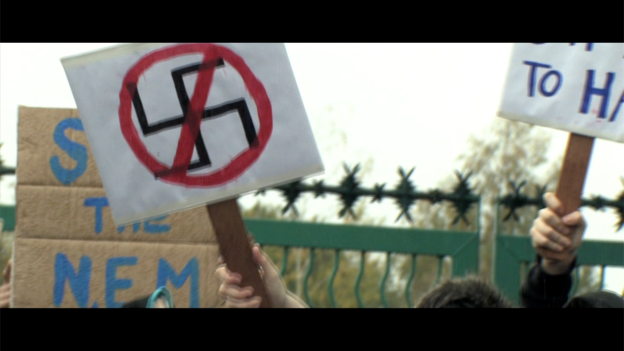 The film was used as part of an anti-extremism project by Crawley Borough Council. It was distributed to schools along with an education pack to help teachers explore the issues raised by the film. The pack also contained further interviews with the characters, which lent more context to the story.

If you would like to explore issues through filmmaking and create a short film with your group then I can provide the necessary training and support to make your project a reality. Visit my website or contact me now for more information about my filmmaking workshops.

In the first year of the project the young people made a science fiction film, an outcome decided by the project organisers. For the project’s second year I wanted the young people to have more ownership of what they made, so I wanted them to select the genre themselves. In order to present the group with their options I ran a series of workshops on genre looking in particular at genres that were easy to define stylistically and visually such as Horror, Western, Thriller, Action and Adventure. In each workshop I would show film clips as examples in order to prompt the group to pick out the defining elements or ingredients of each genre. We looked at the visual style, basic story structure and archetypal characters within each genre and explored the associations that the group had with each type of film. The group then voted for the genre that they would like to work in, choosing to make an Action movie. 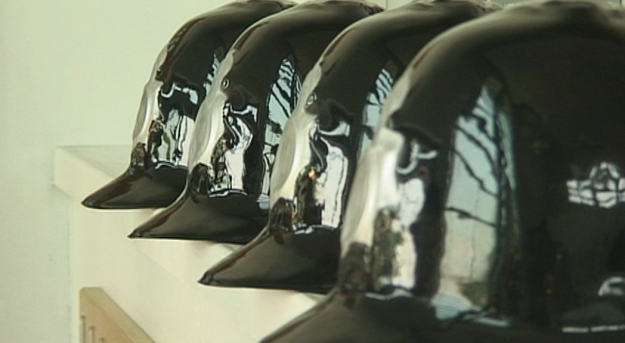 With the genre selected, we then began to explore Action in more depth looking at films like Die Hard, Hot Fuzz and Kung Fu Hustle. The group explored a workshop on the action hero, looking at the typical personality traits of an action hero, their journey to becoming a hero through the course of the story and their relationship to other characters such as a sidekick, a love interest (who finds herself in danger) and an authority figure who challenges the hero’s methods.

With our understanding of the action hero complete, I then led a workshop that looked at the villain’s role within the genre and the ways in which the villain can be compared and contrasted with the hero. We also looked at his henchmen and cronies.

To begin generating ideas for our film, I ran a workshop in high concept movies – films with a simple premise that can be explained in one sentence. The group were asked to identify a number of films from their high concept descriptions and then began creating and pitching their own high concept premises for the film. The aim was to establish a threat for our hero to fight against as this would provide the basis of our plot. We played around with a lot of ideas, established which concepts were the most popular choices and then began to swap and combine elements until we had a story idea that everyone agreed on. The threat was an evil headmaster with a brainwashed army of school children – Totally Awesome Ninja Kids – giving us our title, TANKS.

With our characters identified and a premise on which to build our plot, I then led the group in exploring the hero’s journey more closely and used story structure, along with all of the genre ingredients we’d already listed, to map out a blueprint for a typical action film plot. This blueprint followed a recognizable three-act structure that the group were able to apply to a number of action movies that they were familiar with. This plan outlined roughly ten scenes in which our hero notices something suspicious, investigates, identifies the villain and meets a series of obstacles before finally defeating the enemy. We were then able to slot our story ideas and ingredients into the blueprint and soon had a full story outline for the writers to work with. 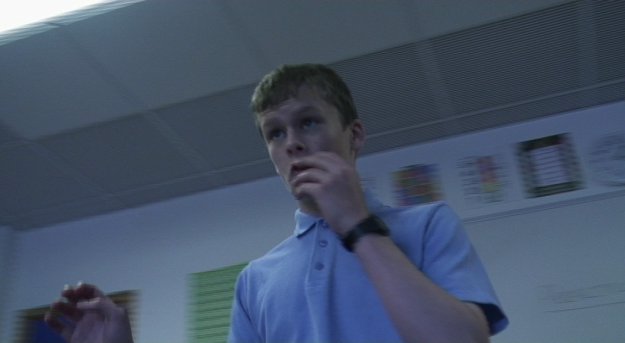 The group split into two working groups for the screenwriting process with a group of writers discussing ideas and drafting scenes while a group of actors improvised scenes and characters. Each week the two groups would feed each other ideas with the writers suggesting scenes or characters for the group to improvise and the actors performing them. I felt that this was a good way for those who didn’t want to write to still feed their ideas into the script and influence the story. Improvisation can be really useful to help writers come up with new ideas or fill in gaps in the story that they might be struggling with.

Castings were filmed and done in groups so that people could also try out for crew roles and get in some practise with the kit.

The film needed to be high energy. Obviously car chases weren’t possible and so our chases had to be on foot. We also had a stage fighting workshop in order to learn safe fighting techniques for the film and devise our onscreen clashes. This was a particularly fun day.

We shot the film over a few weekends at The Rosie and around Oak Grove College. The film was entered into the Oak Grove Community Film Festival and was nominated for ‘Best Drama.’ 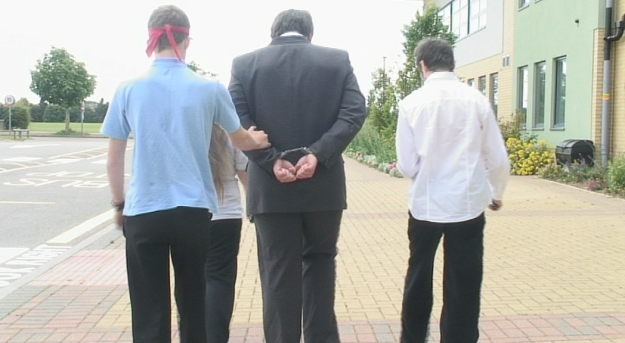 To find out more about my community filmmaking projects and workshops, please visit my website.